IS SHERLOCK HOLMES 3 IN THE PIPELINE AND WILL IT INCLUDE TIME TRAVEL?

During the recent promotion of The Man From U.N.C.L.E., Sherlock Holmes writer and producer Lionel Wigram revealed to IGN that they are still working on the third instalment of the very successful franchise, stating: "We're working on a Sherlock Holmes 3 script. I think we would all love to do one if we could come up with something that really was really going to knock it out of the park and was going to be the best of the three. So we're working on that - it's quite hard to do."

Robert Downey Jr. stated “We had a meeting earlier this year, the three of us,”. He also said that they wanted it to be even better than the first two films, “Sherlock Holmes” and “Sherlock Holmes: A Game of Shadows,” so they were taking their time. “Yes, we have a 'Sherlock 3' in development. We want it to be the best of the series, so that's a pretty tall order,” the “Iron Man” actor told E! Online last November. Downey also got fans hopes up for a possible sequel earlier this year when he posted a picture on Facebook that looked like it could be from the set of a new “Sherlock Holmes” film. The caption simply said, “Master of disguise…” 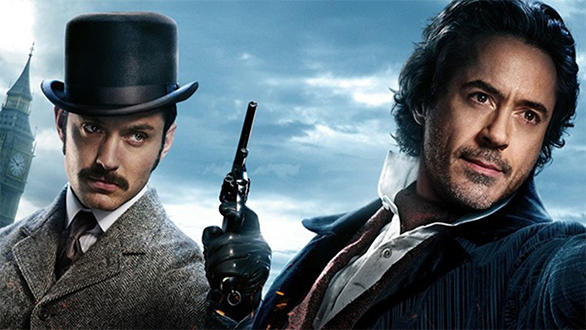 Jude Law was appearing as a guest on MTV’s Happy Sad Confused podcast, and talked about his pitch for Sherlock Holmes 3. It involves time travel:

“I still think it’s a good idea! I don’t want to say, ‘Yeah it’s true,’ and then it kind of blows the idea out of the water. But I guess, if I’m being honest, I think both Robert and Guy kind of went… what? But I kind of thought… I can’t remember. I thought that was in top secret. I’m amazed that someone has leaked that. Yeah, I thought [we could] sort of combine H.G. Wells and Sherlock Holmes.”

"Jude always had good ideas, surprisingly good, and came up with good lines too. But the time travel one was not the zenith of his ideas."

It is not surprising that the producers are very much interested in making a third movie as both films were huge box office successes. Sherlock Holmes, which was released in 2009, earned $524 million in the box office against a budget of only $90 million. The second movie, Sherlock Holmes: A Game of Shadows, which was released in 2011, earned $545.4 million against a budget of $125 million.